A movement unheard of….

Now that the dust has settled and Jantar Mantar finally gets a breather; well no one talks about the monument that has to be decked up for an annual tamasha, many questions come forth automatically. And no it’s not just about, the means and consequences, comparisons and future course; ever wondered why Anna Hazare and Baba Ramdev emerge as the only icons of an anti-corruption movement? One can ignore for a while but not negate completely the fact that their all-India movements rest on a mass base that they cultivated when perhaps each was inhabiting a rather small territory, Ralegan for one and Haridwar for the other. 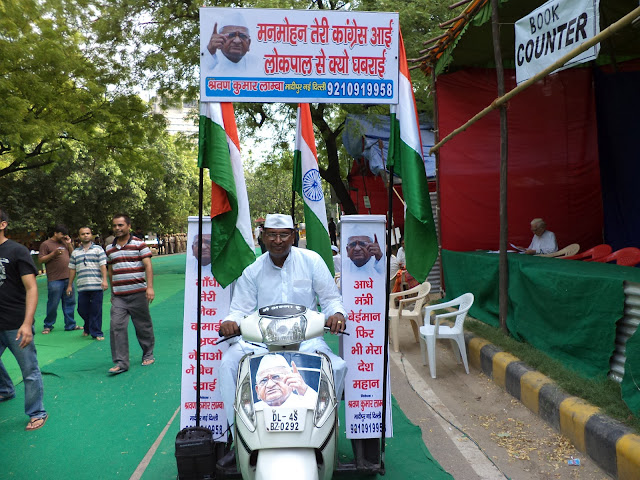 But this blog post is not dedicated to the twins of the civil society who take the very institutions of democracy for granted. They’ve not set a right example for sure. No wonder then that sepoy, K. Mutthu decides to perch himself atop a platform, 100 feet high just next to a telecom tower. The 35-year old thinks that perhaps the solution to his alleged harassment lies in taking a position which attracts ‘attention’.

Very few of you might have heard about the ‘Arya Dal’. As one treaded towards Jantar Mantar the site of revolution that swept the Netizens, preferably the middle class off their feet, there was someone else there too who away from the glare of janta and media wallas was trying hard to make a point. 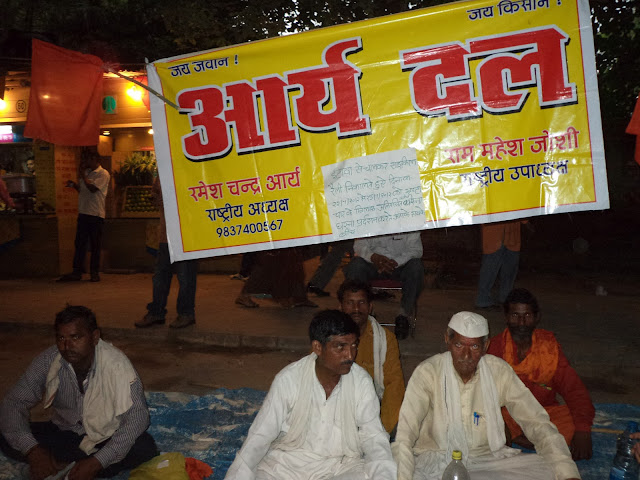 They were just five of them squatted on a blue tarpaulin sheet that is more conveniently used by roadside stalls to shield against sun and rain. In a mad frenzy when every footstep was directed towards the venue where pseudo nationalism overtook merit of logical thought, no one cared, forget pause for even a second to understand what this group of five middle aged men was up to. ‘Arya Dal’ read the poster behind them, above that was the famous slogan pioneered by Lal Bahadur Shastri, ‘Jai Jawan, Jai Kisan’. Were they also a party to the Anna Lila voicing their concern against red tape? –N-O- came the instant answer, we are a separate movement!

What? Are you kidding me? You see on a serious note, something like a ‘movement’ can either be associated with our pre-independence days else it’s the copyright work of Anna & Ramdev Inc.

Five doesn’t make an impressive number when compared to thousands. Right. Hang on; the paper stuck on the lower bottom side of the same poster says that these men have travelled to Delhi from Etawah (U.P.) on a cycle. Some other supporters were also expected soon who were of course yet to cover a distance of 320 kilometer on a cycle. Eagerness to decode this mystery soon leads to their pamphlet which states the year of establishment as 1992. Since then this Etawah based group has been fighting for a variety of causes such as affordable higher education to village boys and girls, adequate compensation to farmers, corruption also being one of the many causes of their struggle. 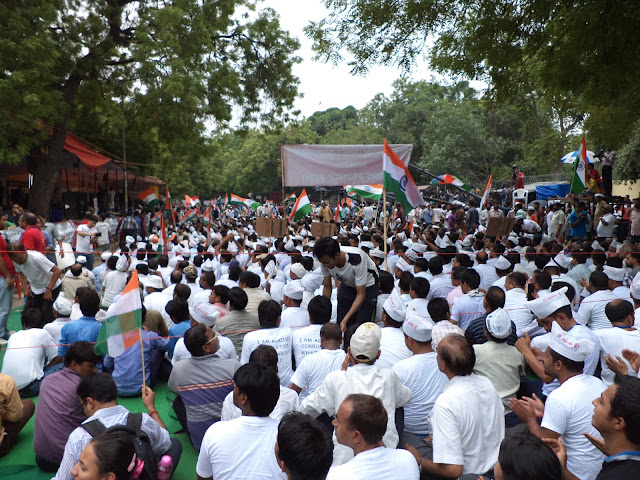 Unfortunately they were not backed by an illustrious organization like IAC (India Against Corruption) which can infuse a populist notion in their Andolan. Devoid of a support mechanism in the form of social networking portals, funky badges, swaying tricolor, perhaps this unheard of group was paying the price of technology-related illiteracy. The very assembly point next to Jantar Mantar spoke volumes about their desperate efforts to make their presence felt.

But the riffraff and that also a disillusioned one would disqualify the efforts of an ‘Arya Dal’ within minutes. Stuff like this comprises of wonderful case studies; Goldspot failed when PepsiCo roped in bollywood celebs for promotion. And the absence of a marketable face shatters the very aspirations of the Arya Dal. This was just one such not-so-happening and media deprived movement which I came across there might be thousands others which die due to paucity of resources.

If only clones of Anna could be distributed across and each group might have utilized the associated clout in his chosen manner.

Hmm, I could pitch in the idea of a food court at my work place!

Paradigms of thought do not change with a movement, what needs to be changed is perhaps the growing moroseness throughout a complex whole called Indian society.
Posted by akanksha at 10:29 PM